The first incident happened at approximately 1.20pm on Sunday 6th October. A lady suffered an injury to her foot whilst out walking with friends near to Three Rock Mountain in the Dublin foothills. Unable to continue, the group communicated their position to the emergency services via 999/112. An HSE paramedic on a motorbike was the first to attend the scene and because of the inaccessible location he quickly requested assistance from Mountain Rescue. Team members from Glen of Imaal Red Cross Mountain Rescue and Dublin & Wicklow Mountain rescue immediately responded and the lady was quickly treated and transported in a Mountain Rescue vehicle to a waiting ambulance.
In the second incident a lady in her early forties had reached the summit of the Sugarloaf, overlooking the N11 near Bray, late in the afternoon. As she began the tricky descent down one of the gullies near the top of the mountain, she slipped and fell and sustained a serious upper arm injury. Advanced paramedics from both the HSE and Mountain Rescue were quickly with the lady and together treated her for her injury. As daylight faded and temperatures dropped, it became clear that the nature of the injury meant the lady was not going to be able to safely make the descent herself. The decision was made to evacuate her from the mountain by stretcher and necessary equipment was carried up the steep ground to the casualty’s location. Mountain Rescue teams carried her from near the top of the Sugarloaf to the base, where a waiting HSE ambulance transported her to hospital. 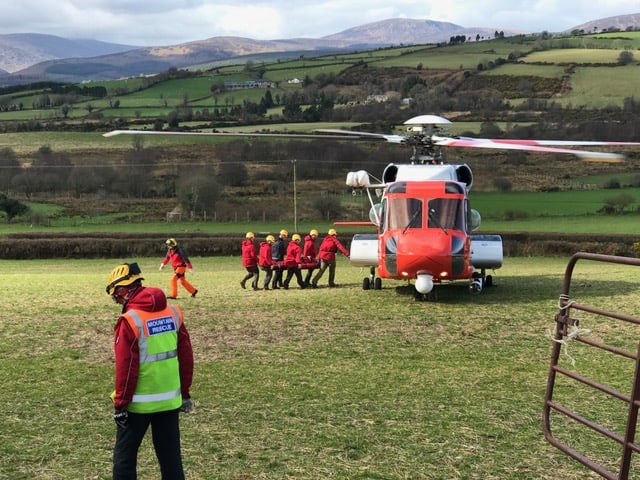